Declarative code (e.g. functional composition with Streams) provides superior code metrics in many cases. Code your way through this hands-on-lab article series and mature into a better Java programmer by becoming a Master of Java Streams.

The whole idea with Streams is to represent a pipeline through which data will flow and the pipeline’s functions operate on the data. This way, functional-style operations on Streams of elements can be expressed. This article is the first out of five where you will learn firsthand how to become a Master of Streams. We start with basic stream examples and progress with more complex tasks until you know how to connect standard Java Streams to databases in the Cloud.

Once you have completed all five articles, you will be able to drastically reduce your codebase and know how to write pure Java code for the entire applications in a blink.

Here is a summary of the upcoming articles:


Since we are firm believers in the concept of ”Learning by doing”, the series is complemented by a GitHub repository that contains Stream exercises split into 5 Units - each corresponding to the topic of an article. Instructions on how to use the source code are provided in the README-file.

What are Java Streams?

The Java Stream interface was first introduced in Java 8 and, together with lambdas, acts as a milestone in the development of Java since it contributes greatly to facilitating a declarative (functional) programming style. If you want to learn more about the advantages of declarative coding we refer you to this article.

A Java Stream can be visualized as a pipeline through which data will flow (see the image below). The pipeline’s functions will operate on the data by e.g. filtering, mapping and sorting the items. Lastly, a terminal operation can be performed to collect the items in a preferred data structure such as a List, an Array or a Map. An important thing to notice is that a Stream can only be consumed once.

A Stream Pipeline contains three main parts; the stream source, the intermediate operation(s) (zero to many) and a terminal operation.

Let’s have a look at an example to get a glimpse of what we will be teaching throughout this series. We encourage you to look at the code below and try to figure out what the print-statement will result in before reading the next paragraph.


Since the Stream API is descriptive and most often intuitive to use, you will probably have a pretty good understanding of the meaning of these operations regardless if you have encountered them before or not. We start off with a Stream of a List containing four Strings, each representing an African animal. The operations then filter out the elements that start with the letter “L”, converts the remaining elements to uppercase letters, sorts them in natural order (which in this case means alphabetical order) and lastly collects them into a List. Hence, resulting in the output [“LEMUR”, “LION”].

In this case, the Stream Source was a List although many other types can act as a data source. We will spend the rest of this article describing some of the most useful source alternatives.

Streams are mainly suited for handling collections of objects and can operate on elements of any type T. Although, there exist three special Stream implementations; IntStream, LongStream, and DoubleStream which are restricted to handle the corresponding primitive types.

An empty Stream of any of these types can be generated by calling Stream.empty() in the following manner:


Empty Streams are indeed handy in some cases, but the majority of the time we are interested in filling our Stream with elements. This can be accomplished in a large number of ways. We will start by looking at the special case of an IntStream since it provides a variety of useful methods.

A basic case is generating a Stream over a small number of items. This can be accomplished by listing the integers using IntStream.of(). The code below yields a simple stream of elements 1, 2 and 3.
Listing all elements manually can be tedious if the number of items grows large. In the case where we are interested in values in a certain range, the command .rangeClosed() is more effective. The operation is inclusive, meaning that the following code will produce a stream of all elements from 1 to 9.
An even more powerful command is .iterate() which enables greater flexibility in terms of what numbers to include. Below, we show an example of how it can be used to produce a Stream of all numbers that are powers of two.
There are also several perhaps more unexpected ways of producing a Stream. The method chars() can be used to Stream over the characters in a String, in this case, the elements “A”, “B” and “C”.
There is also a simple way to generate a Stream of random integers.

Streaming existing data collections is another option. We can stream the elements of an existing Array or choose to list items manually using Stream.of() as previously shown and repeated below.

Stream from a Collection

It is also very simple to stream any Collection. The examples below demonstrate how a List or Set can be streamed with the simple command .stream().

Stream from a Text File

Sometimes it can also be useful to stream the contents of a text-file. The following command will provide a Stream<String> that holds every line from the referenced file as a separate element.

Now that we have familiarized you with some of the ways of creating a Stream, we encourage you to clone this GitHub repo and start practicing. The content of the article will be enough to solve the first Unit which is called Create. The Unit1Create interface contains JavaDocs which describes the intended implementation of the methods in Unit1MyCreate.
The provided tests (e.g. Unit1MyCreateTest) will act as an automatic grading tool, letting you know if you solution was correct or not. 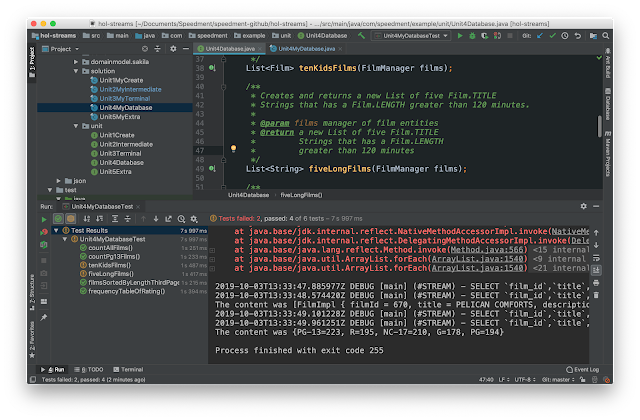 If you have not done so yet, go ahead and solve the work items in the Unit1MyCreate class. “Gotta catch ‘em all”.

In the next article, we will continue to describe several intermediate operations that can be applied to these Streams and that will convert them into other Streams. See you soon!