Java: How to Become More Productive with Hazelcast in Less Than 5 Minutes

What if you want to use a Hazelcast In-Memory Data Grid (IMDG) to speed up your database applications, but you have hundreds of tables to handle? Manually coding all Java POJOs and serialization support would entail weeks of work and when done, maintaining that domain model by hand would soon turn into a nightmare. Read this article and learn how to save time and do it in 5 minutes.

Now there is a graceful way to manage these sorts of requirements. The Hazelcast Auto DB Integration Tool allows connection to an existing database which can generate all these boilerplate classes automatically. We get true POJOs, serialization support, configuration, MapStore/MapLoad, ingest and more without having to write a single line of manual code. As a bonus, we get Java Stream support for Hazelcast distributed maps.

Let us try an example. As in many of my articles, I will be using the Sakila open-source example database. It can be downloaded as a file or as a Docker instance. Sakila contains 16 tables and a total of 90 columns in those tables. It also includes seven views with additional columns.

To start, we use the Hazelcast Auto DB Integration Initializer and a trial license key. 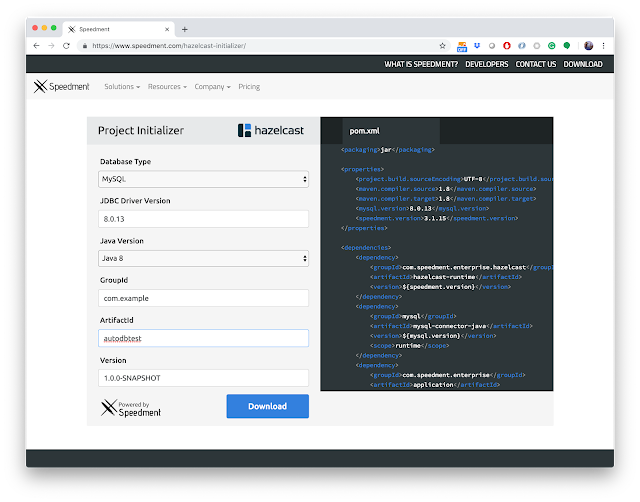 Fill in the values as shown above and press “Download” and your project is saved to your computer. Then, follow the instructions on the next page explaining how to unzip, start the tool and get the trial license.

Next, we connect to the database: 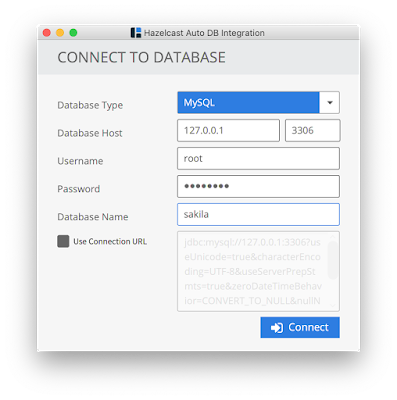 The tool now analyses the schema metadata and then visualizes the database schema in another window: 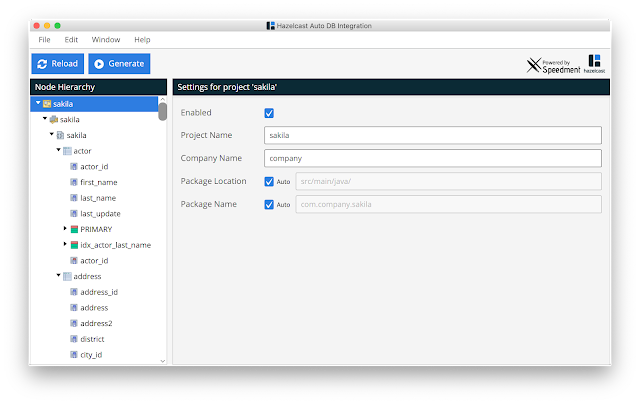 Just press the “Generate” button and the complete Hazelcast domain model will be generated automatically within 2 or 3 seconds. 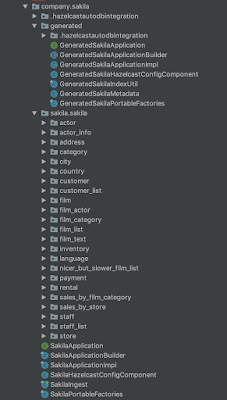 This is how the architecture looks like where the Application talks to the Hazelcast IMDG which, in turn, gets its data from the underlying Database:

The code generated by the tool need only be present in the Application and not in the Hazelcast IMDG.

Creating a Hazelcast IMDG is easy. Add the following dependency to your pom.xml file:

Then, copy the following class to your project:


Run this main method three times to create three Hazelcast nodes in a cluster. More recent versions of IDEA requires “Allow parallel run” to be enabled in the Run/Debug Configurations. If you only run it once, that is ok too. The example below will still work even though we would just have one node in our cluster.

Running the main method tree times will produce something like this:

Nice! Our three-node-cluster is up and running!

Before we can run any business logic, we need to ingest data from our database into the newly created Hazelcast IMDG. Luckily, the tool does this for us too. Locate the generated class named SakilaIngest and run it with the database password as the first command line parameter or modify the code so it knows about the password. This is what the generated class looks like.

When run, the following output is shown (shortened for brevity):


We now have all data from the database in the Hazelcast IMDG. Nice!

Now that our grid is live and we have ingested data, we have access to populated Hazelcast maps. Here is a program that prints all films of length greater than one hour to the console using the Map interface:

The film length is an optional variable (i.e., nullable in the database) so it gets automatically mapped to an OptionalLong. It is possible to set this behavior to “legacy POJO” that returns null if that is desirable in the project at hand.

There is also an additional feature with the tool: We get Java Stream support! So, we could write the same functionality like this:

The tool generates POJOs that implements Hazelcast’s “Portable” serialization support. This means that data in the grid is accessible from applications written in many languages like Java, Go, C#, JavaScript, etc.

One for each table/view that implements the Portable interface.

One for each schema. This is needed to efficiently create Portable POJOs when de-serializing data from the IMDG in the client.

One for each table/view. These classes can be used by the IMDG to load data directly from a database.

One for each table/view. These classes are used for configuration.

One per project. This can be used to improve the indexing of the IMDG based on the database indexing.

One per project. Creates automatic configuration of serialization factories, class definitions, and some performance setting.

One per project. Template for ingesting data from the database into the Hazelcast IMDG.

The tool also contains other features such as support for Hazelcast Cloud and Java Stream support.

Connections to Hazelcast Cloud instances can easily be configured using the application builder as shown in this example:

I estimate that the tool saved me several hours (if not days) of boilerplate coding just for the smaller example Sakila database. In an enterprise-grade project with hundreds of tables, the tool would save a massive amount of time, both in terms of development and maintenance.

Now that you have learned how to create code for your first exemplary project and have set up all the necessary tools, I am convinced that you could generate code for any Hazelcast database project in under 5 minutes.